It all started ten years ago as a blog, The William Brown Project when Matt Hranek began writing about his city/country life.

“I was documenting my outdoor pursuits, cooking, my collections, how to make cocktails, I showed my love for charcuterie and profiling discoveries from my travels around the world as a photographer.”

In 2013 Esquire Network created a show with Hranek that was called Alter- nate Route. It was a travel magazine format in which he travelled to a city per episode, meeting locals, checking out the food scene, figuring out the soul of the city. This format resonated with a lot of men across the country.

A few years later, Matt wrote his first book, A Man and His Watch, which became a best-seller, published by Artisan. His second in the series, A Man and His Car is in production now and will be published in the fall of 2020.

“Alongside these projects, WM Brown formed as a lifestyle magazine touching on so many relevant things for men,” Hranek says.

“We are relatable to many men. At a time when our world is polarized, WM Brown is a community of brothers who wants to enjoy life at its fullest.”

The approach is to be relatable but elevated, to share what the editors and the people behind the magazine have discovered. There’s an aim to give confidence to the readers; that they can go without socks, wear white jeans in the winter, own a tux, and set up their own bar.

It’s the same approach and relatability that led to the collaboration between WM Brown and Snoot. We found this great idea in making a parka together because we want to make something that people can relate to.

The WM Brown x Snoot Parka is a model that’s been inspired by a vintage jacket Mr Hranek has had in his collection for many years. It’s an updated version, crafted with carefully selected fabrics that characterize Snoot’s quality and du- rability. This Parka is a must-have as you set off from the city towards the great outdoors.

“I’m an avid vintage jacket collector and this parka that I’ve co-designed with Snoot is one of my absolute favourites.”

This model comes in a very limited volume of only 93 jackets and is produced in Europe with the finest Italian goose down and feathers.

When Mathias Bergh was 19 years old, he was discovered by a model scout who introduced the teenager to a French model agency called Ford Models.

”I didn’t know anything about the fashion industry before this, but after some thought, I went to Paris in connection with men’s fashion week,” he says. ”After running around various castings in Paris for two days, my agent called me and told me that Gucci had heard about me and wanted to meet up. It’s a brand that even a football guy like me knew about, so I was very excited to meet up.” A few hours later Mathias flew from Paris to Florence, Italy, where Gucci’s headquarters are located.

”I remember the driver asking me if we were going to the headquarters. That’s when I began to feel a little nervous. What did Gucci want me to do? If you think about it, at the time I had only done one job as a model. I also remember thinking that I knew more about my favorite football team than about how to pose in front of a camera.”

Sitting in a room in the head office in Florence, Mathias is greeted by two older women with authority. One of the two women were Frida Giannani – Gucci’s Creative Director between 2006-2014 (Frida replaced Tom Ford). ”Frida liked me. In the three-four years that went after that first meeting, she booked me for every shoot they had: Fashion shows, lookbooks, promotions, fittings, store openings, you name it.”

As a junior model who just entered the industry, to get booked by and being able to add Gucci to your portfolio is a massive push to further aid a lucrative career in an industry where companies love models that are seen everywhere. ”I became some kind of supermodel. Assignments for Tom Ford, Prada, Burberry, and H&M were just a few of the things I dedicated my time to. I was ranked as the 5th most successful male model in the world at the time. ”I mean, it’s very honorable and I had a lot of fun,” Mathias says smiling.

He acknowledges that the model industry can be an unpleasant place, but that he never saw that side. ”I didn’t go through what many views as the proper channel to get these big jobs, I sort of just got all of the big assignments early on in my career. I can’t say that I saw any of the dark sides of what this industry has to offer. Although I know about body ideals and all the injustice that’s lingering and hoovering over models in general, and of course it’s very lonely to travel constantly. You live by yourself most of the time and you don’t have any routines.”

After having worked in the industry for 10 years, full time, Mathias felt that it was time for something new. Having been intimate with the industry and having seen how bookings are done with models and creators (photographers, stylists etc), Mathias saw that everything’s done in an old fashioned way.

”It hadn’t [the modeling industry] developed digitally like other industries. It made me want to change that. So I met up with style icon and entrepreneur Emilia de Poret, and we decided to build a digital booking service.”

Mathias and Emelia’s booking service enable customers to be able to book models and creators directly on the platform, which makes every project more time and cost-effective. With our service, we want to give back power to those who deserve it, namely customers and models/creators. Of course, physical contact will always be needed, and we’re aware of that, but digitalizing parts of the production will be a simpler way to book than if you go through the traditional way.

This summer we launched our timeless Polo that comes in five different colours and in two models with different materials. Our Fiere model is smoother and with a modern take, meanwhile our Portofino model has the classic tennis-material used for generations. Easily matched with jackets in our collection, the Polo is an essential in any modern man’s wardrobe. 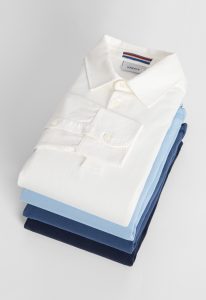 The Bespoke Dudes is a company founded by Italian menswear consultant Fabio Attanasio. Growing up in Naples, it’s not surprising that Attanasio ended up with such a passion for menswear.

The brand and its pieces are handcrafted in Italy by Cadore-based artisans, who are all hand-picked by Attanasio. The frames consist of acetate made by leading Varese-based plastic manufacturer Mazzucchelli 1849, while the hinges of each set of specs feature four screws – rather than the standard two – to guarantee durability.

The lens shape and design fall in line with seasonal trends; this year with round frames, tapered temples and tortoiseshell designs having all been spotted on the runways.

Currently, the Bespoke Dudes Eyewear offers two distinct styles: Cran and Pleat. The first is characterized by a simple, clean design and takes its name from the space between the collar and the lapel of a jacket. These models are unisex and handmade in Italy. These glasses are made available in three finishes, including honey, transparent, and tortoiseshell.

Attanasio has made it clear that he is not a designer, but rather a taste-blender with know-how. Before settling on the perfect shapes, he made three prototypes before each collection. The brand’s choice of lens shape and design falls perfectly in line with seasonal trends; round frames, tapered temples and tortoiseshell designs. These have all been spotted on the runways.

Snoot is happy to be selling The Bespoke Dudes Eyewear at our store, Artillerigatan 25 in Stockholm, Sweden. We’ve handpicked what we believe to be some of the best models and colours. Make sure to ask for them if you swing by our showroom.